Post here about all aspects of D2 mod making whether it's information, problems or whatever. Please specify whether your post is relating to Classic D2 or the Expansion.

Hello, I made a new enemy... more like replaced an unused monster(gorgon1, hcIdx 36) with act5 barbarian, and tested it with 3 different AIs.

They all have RN animation and their A.I.s utilize it too. The problem is using their A.I. for act5barb combatants. 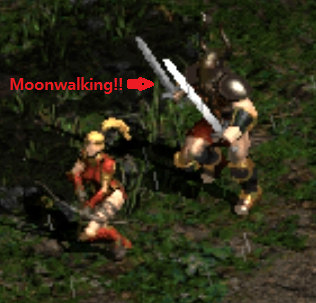 The monster actually works well, it can damage the player with A1, A2, obeys ai parameters(monstat.txt), using skills if I make it to.

2. The new enemy I created is still broken(moon walks) if I populate Frigid Highlands with them. Untouched NPC barbs can use RN animation just fine.

3. Levels.txt actually does not seem to be populating Frigid Highlands with NPC barbs, because none of the columns have NPC barb or act5barb1,2 in them. (I also can't populate other areas with their ID token)

4. If I give the new barbarian enemies in Blood Moor the "Npcbarb" A.I., they will MOONWALK in Act1.

I looked into this post to see if this is act5 monster specific issue, but I'm not sure if they are even related.
viewtopic.php?t=6277

I ended up giving it a Duriel A.I., making a new charging skill that uses a custom sequence using their RN animation, but paladin charge skill makes the monster reaaally clunky.

Does anyone know what is causing the moonwalk?

Does the new enemy barbarians die with their worn equipment.

You see, I made an request.
[Request] Death Animation of Diablo2 Players w/ Equipment?
Top

It might be worth noting that those wilderness act 5 barbs are hardcoded to move towards Shenk, not sure if this would cause the issue you are experiencing though (as its part of the AI IIRC). I recommend avoiding the AI an duplicating the monstats2 tokens or making new tokens using MergeDCC.

Netiquette, Do you USE it?!?! | Nefarius' Fixed TXT Files | Terms Of Service
Blackened | Day of Death | D2GFEx
"What was yours is mine. Your land, your people, and now your life." - Lim-Dul, the Necromancer
Judgement is Final, Death is Eternal
Top
Post Reply
3 posts • Page 1 of 1